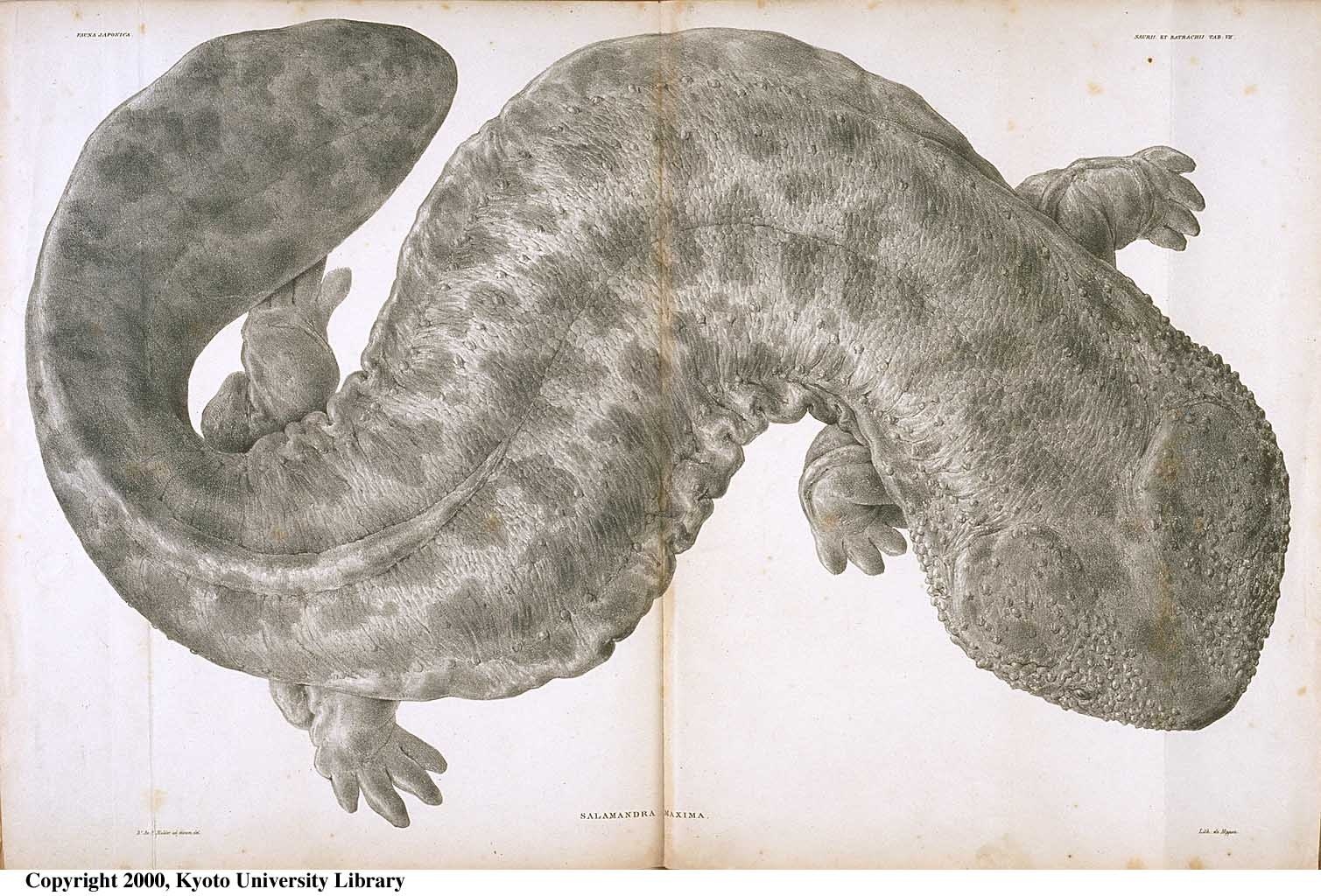 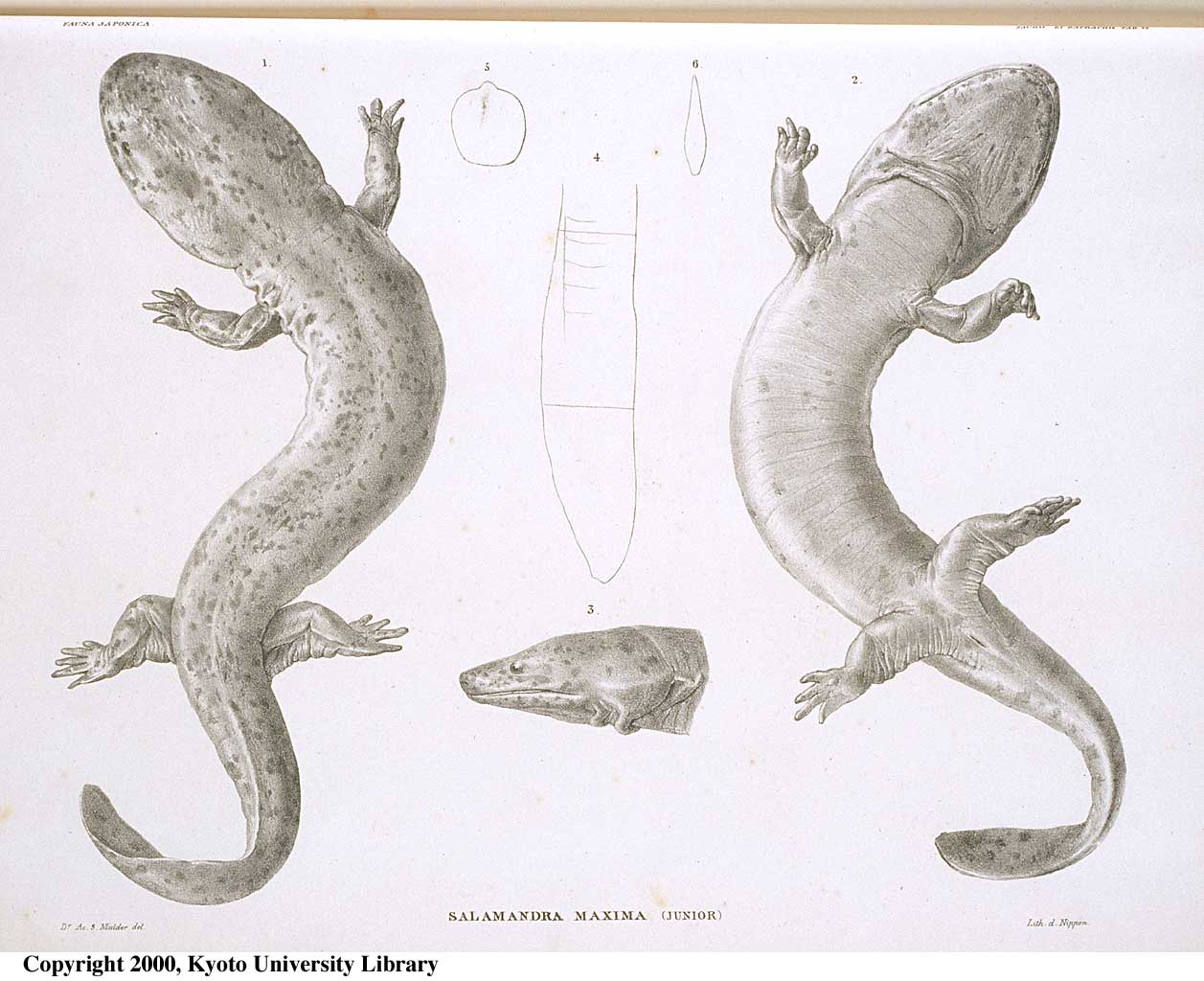 Sometimes research takes you in surprising directions. I started my day by perusing Birds of Japan (1880) by T.W. Blakiston (a famous naturalist/businessman who discovered the Blakiston’s line — a zoo-geographical boundary demarcated by the Tsugaru Strait that separates the Siberian avifauna of Hokkaido from that of Honshu). Somehow, through a strange twist of sources, I ended up absorbed by the otherworldly illustrations of the Japanese Giant Salamander in Philipp Franz Balthasar von Siebold’s Fauna Japonica (1834-1838). 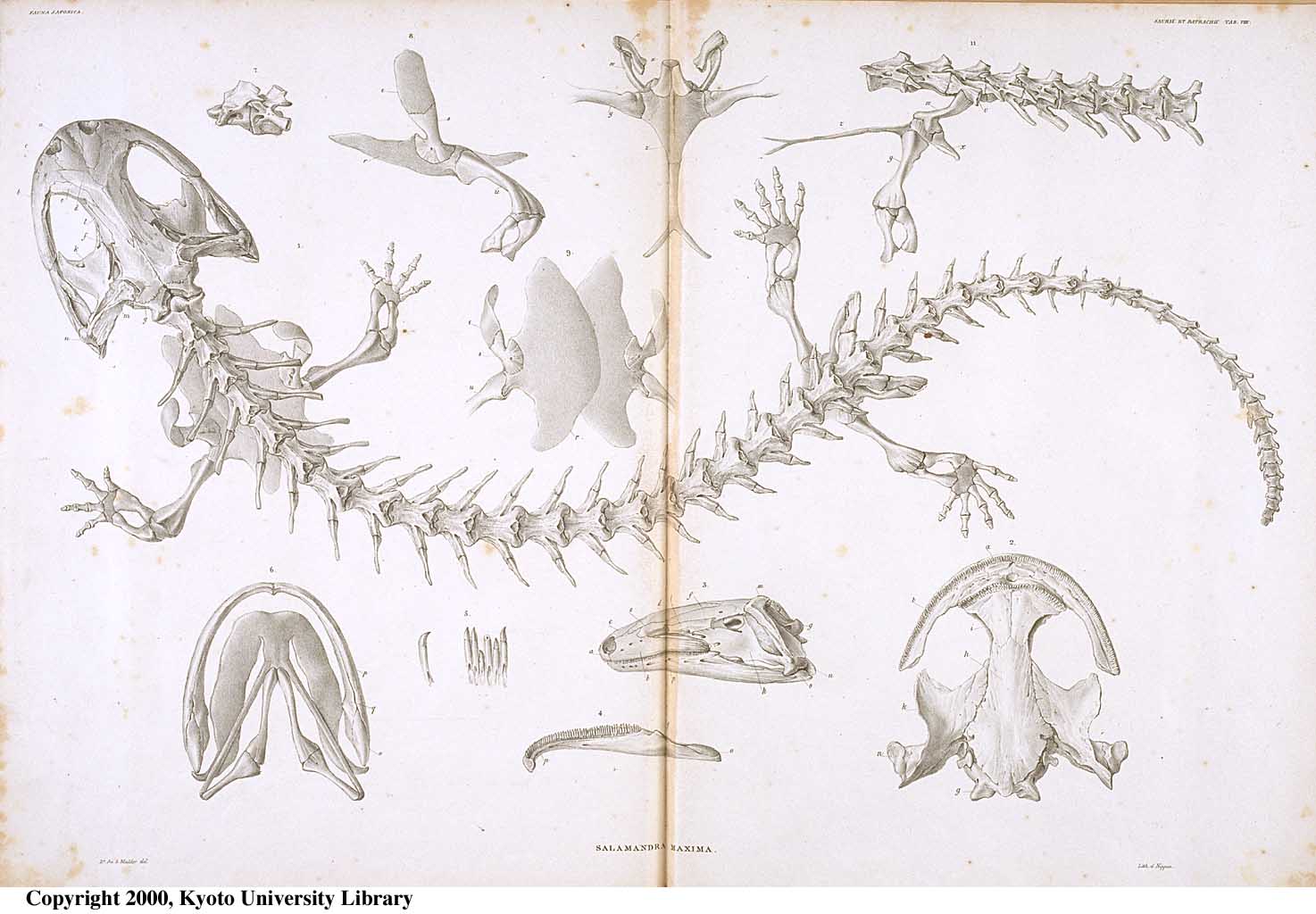 The illustrations are stunning. Many of the drawings were first completed by artists like Kawahara Keiga, and then later made into lithographs (this set is by Dr. Ae. S. Mulder). Kawahara was an artist working out of Dejima who completed requests for Dutch visitors like Siebold, a physician at the Dutch East India Company Dejima Factory. Since Siebold was in need of “realistic” images that catered to European tastes, two men were sent from Batavia in order to train Kawahara (Heinrich Burger and Carl Hubert de Villaneuve). His illustrations, in addition to those by other Japanese artists, would form the basis of Fauna Japonica, which was one of the first books to be written on Japanese fauna in a European language (French). Siebold sent several shipments of specimens back to Europe, including a Japanese Giant Salamander destined for Leiden. 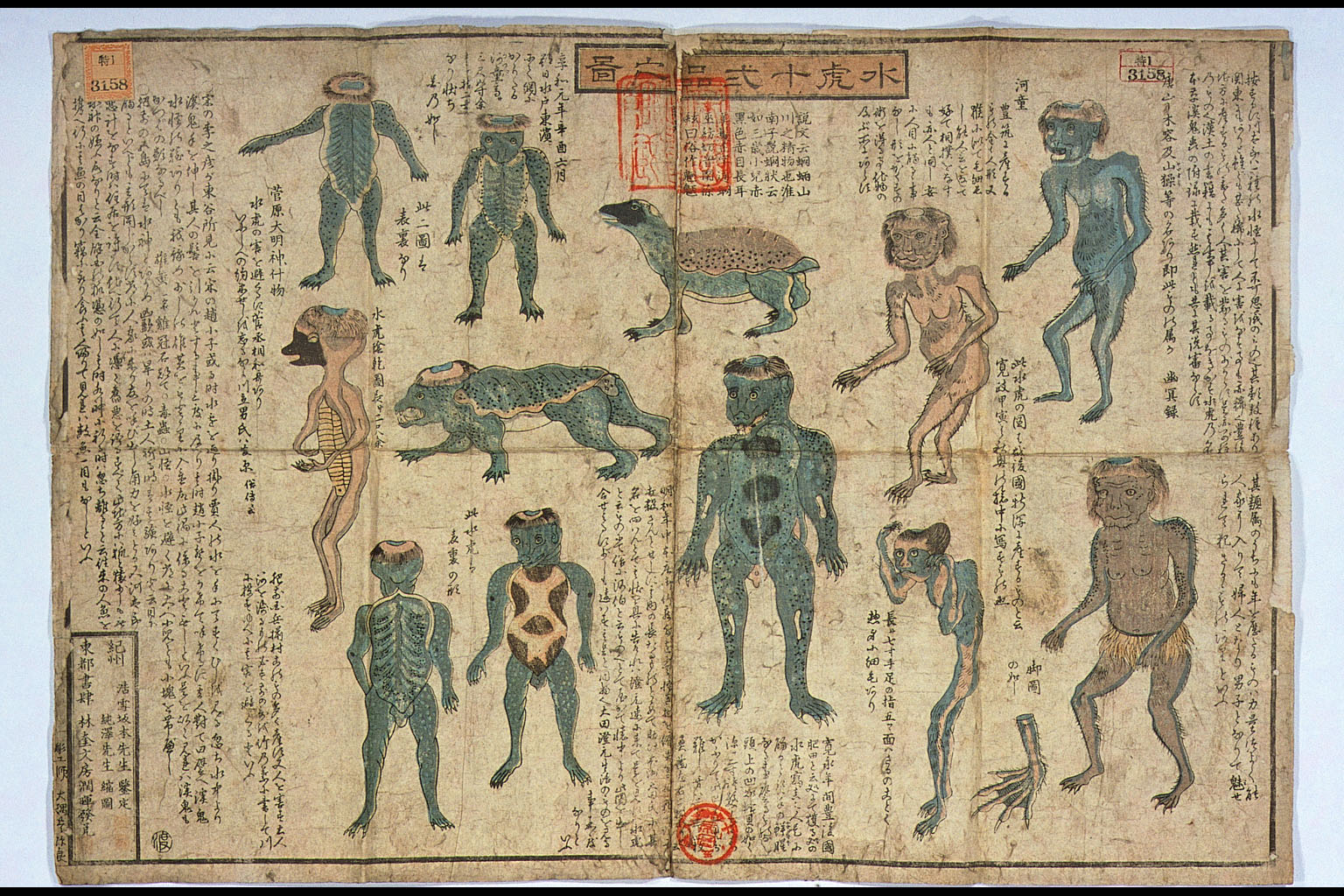 Some of you may already be familiar with the “hanzaki” or the “ousanshouuo” from the show River Monsters on Animal Planet, where biologist and master angler Jeremy Wade goes on a quest to catch the elusive (and near threatened) Japanese giant salamander. He (and others) speculate that Japanese folk legends about the kappa may have derived from the creature. 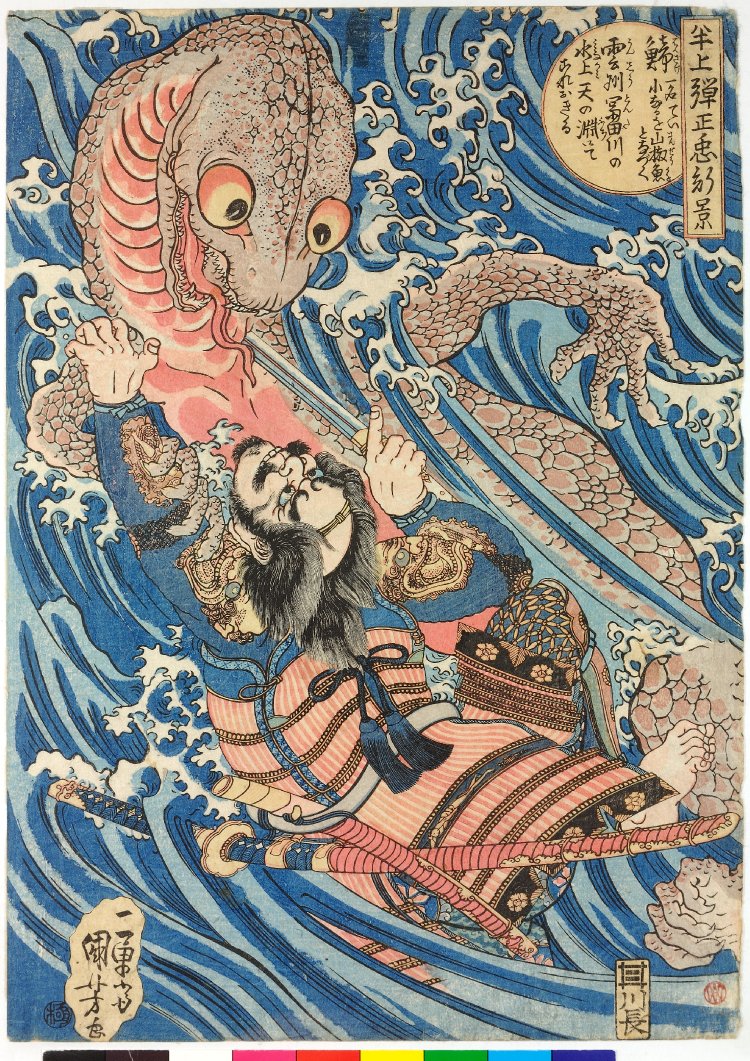 However, the hanzaki actually has an interesting legacy in Japanese visual culture as well. An early example being Utagawa Kuniyoshi’s Hangami Danjo-no-jo Arakage killing a giant salamander in the Tontagawa river in the province of Izumo (Edo period, woodblock print). The samurai warrior grapples with the salamander in a battle amongst the white crests of waves. The salamander looks reptilian in appearance to me, with its tongue lashing out between sharp teeth, and its splayed claw-like digits. However this motif of the samurai warrior killing a beast (sometimes real, sometimes mythological) does emerge several times across Kuniyoshi’s works. 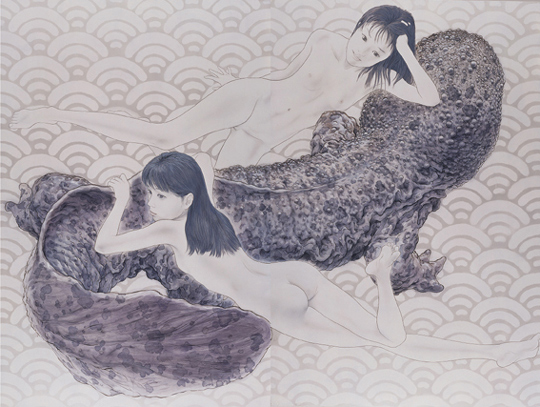 However, a more recent example would be Aida Makoto’s Giant Salamander (2003, acrylic on panel). The amphibian penetrates the space between two prepubescent girls in the nude, arranged atop a background made from a repeating wave pattern. They languidly drape themselves over the creature, exposing both the front and back sides of their sex. Their soft, smooth, white bodies contrast markedly with the dark, textured, and wrinkled skin of the hanzaki. As noted by others, its shape looks vaguely phallic in design (a motif not uncommon in Aida’s work).

If you happen to come across any other appearances of the Japanese giant salamander, please let me know!