posted in Announcement, Conference, Teaching on September 15, 2017 by Christina

This year I am thrilled to be in attendance at Mechademia at the Minneapolis College of Art and Design. The theme this year is Science Fictions. The CFP explains this notion in the following terms:

Science fiction gives us free rein to imagine a different world, giving us insight into what in our own world has become naturalized and allowing us the space to question the potentials of technologically enhanced futures. The questions provoked by science fiction strategies and forms often provide insights that lead us to imagine our own world in a different light. Mechademia 2017 focuses on Science Fictions. Science fiction is central to the study of Asian Popular Cultures because it is the key narrative formation of anime, and the subject of many manga volumes and video game narratives. We encourage papers that analyze science fiction tactics and narratives to explore themes regarding the way the geo-political, geo-economic climatic situation has been reflected, criticized, and made hypothetical through futuristic utopian/dystopian narratives in anime, manga, art, design, illustration, literature, film, and gaming. 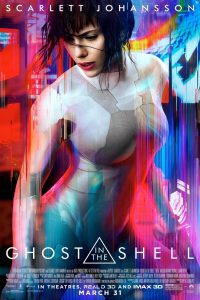 I won’t be presenting this year, but I am so very proud that my undergraduate student Rocky Pierson (majoring in Electronic Media Studies at St. Thomas University and minoring in Graphic Design at St. Kate’s) will be presenting her insightful paper, “In the Age of Technology, the West Calls for a Separation of the Ghost and the Shell,” that explores Mamoru Oshii’s 1995 Ghost in the Shell in contrast to Rupert Sanders’ 2017 adaptation. Rocky makes a fascinating argument how each film considers its potential audience with regard to the fear (or emancipatory potential) of technology. Her argument engages in both theology and philosophy as she considers the ontological importance of the cyborg body in each film’s visuals and narrative, while questioning how each views the possibilities of the post-human condition.

If you are interested in hearing Rocky’s paper, she is presenting on the 3rd panel at 9:45am on Saturday morning (9/23). She will be presenting alongside Genevieve Gamache, Muhammad Aurangzeb Ahmad, and Andrea Horbinski.